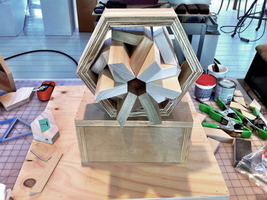 A native of Nebraska, Watson earned his BFA and MFA from the University of Nebraska at Lincoln where he drew inspiration from American and European works in the permanent collection of the Sheldon Art Gallery, including such artists as Josef Albers, Tony Smith, and Mark Rothko.  He received an Artist Fellowship from the National Endowment for the Arts and two grants from the National Endowment for the Humanities. His invitations to serve as a guest artist include Cranbrook Academy of Art, the Ohio State University, and Lehman College in New York.
His work has been presented in eighteen solo exhibitions in Michigan, Texas, Illinois and Florida and in more than one hundred group exhibitions in the United States. A dozen public and corporate collections including the Veterans Administration Hospital, Wood (Milwaukee), Wisconsin, Standard Oil, Inc., Chicago, the Museum of Geometric and MADI Art, Dallas, and the National Collection of Fine Arts, Washington, D.C. hold his work. Watson has published one book and four exhibition catalogues. He has administered two college level art programs was the founder and Director of the Urban Institute for Contemporary Arts in Grand Rapids, Michigan. Watson was a consultant to the Art in Public Places program of the National Endowment for the Arts. His teaching at both the undergraduate and graduate levels is in a variety of studio disciplines including drawing, painting, design and color. He also offers seminars in art criticism and in professional practice for artists. Watson has offered instruction in art criticism at universities in Peru and Mexico as well as in Budapest, Prague and Vienna.
Loading...